RGS is closed —RGS is closed to all students other than vulnerable children or those whose parents are identified as key workers. Please contact the school on 811100 for more details or clarification. PLEASE KEEP YOUR CHILD AT HOME IF YOU ARE ABLE TO DO SO. HOME IS THE SAFEST PLACE!

RGS is closed to all students other than vulnerable children or those whose parents are identified as key workers. Please contact the school on 811100 for more details or clarification.

PLEASE KEEP YOUR CHILD AT HOME IF YOU ARE ABLE TO DO SO. HOME IS THE SAFEST PLACE! 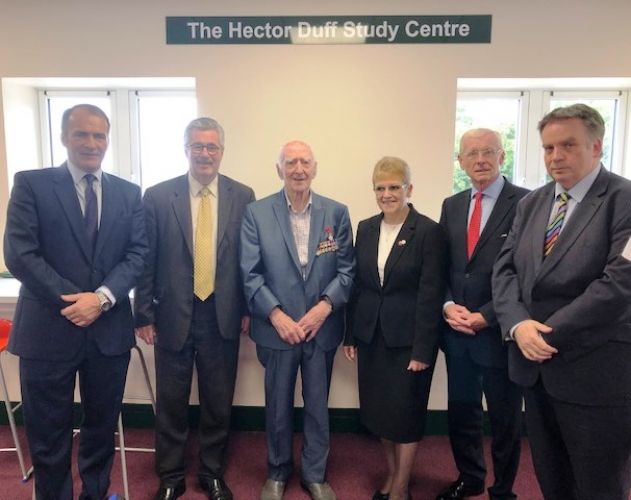 The extension to Ramsey Grammar School’s Sixth Form Centre was formally opened this week by island legend, Hector Duff BEM MM. Born in Sulby in 1919, Hector has a long association with the north of the island and, in recent years his ties have been strengthened through his work with the students and staff at RGS who unanimously chose him to open the new study facility

The ceremony was attended by HE Lieutenant Governor, Sir Richard Gozney, President of Tynwald, Hon Steve Rodan, Director of Education Geoff Moorcroft and many other distinguished guests and Sixth Form students.

Headteacher, Annette Baker said “It was a unanimous decision to choose Hector to open our wonderful new Sixth Form extension, and we are delighted to name the centre after him. Many generations of young people will be reminded of what he did in the service of his country to preserve the freedoms which we all enjoy. Hector is without doubt a legend in his own lifetime but also an important member of the family that is Ramsey Grammar School.”

Lieutenant Governor, Sir Richard Gozney paid tribute to Hector’s contribution to the education of young people on the Isle of Man as well as reminding assembled guests of his enormous contribution to Manx life in general.

Hector also unveiled “Our Enchanted Isle”, a fabulous tiled mosaic, devised by artist, Elaine Edge, but created by every single member of the school’s Year 7 students. Guests and students were then able to enjoy viewing the art exhibition featuring the work of this year’s Sixth Form A Level students, two of whom received Rotary Club awards for their work.

Mrs Baker added “We are very proud of the extremely high standard of art and photography work in school, rewarded last year by the Sovereign Arts Foundation prize which funded this wonderful mosaic. Congratulations to Iwan Riley and Lewis Withington, recipients of the Rotary Club awards in recognition of their stunning work.” One of Iwan’s pieces was featured on the programme for the event and will be one of Ramsey Grammar School’s entries to this year’s Sovereign Arts Foundation art competition.

After the opening of the centre, Hector spent the rest of the morning with Year 9 History students, answering their questions about his second world war and life experiences.